On The Move with Wayne White – Week #2 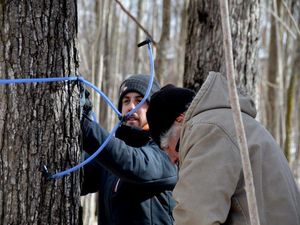 Before the arrival of school groups and the ever popular maple syrup festival’ the arduous task of putting up sap lines and pails is taken on by the Credit Valley Conservation and Upper Grand District School Board’s staff. Blue lines are easily visible while walking on the trails around the sugar shack. Lynn Picard, the outdoor education centre instructor, proudly stated to me that there are 131 holes drilled in the maple trees south of the sugar shack which are joined by the blue sap lines. This is one demonstration method for collecting sap. The lines were once made out of clear tubing but were frequently being chewed by squirrels that were attracted to the air bubbles which were created by the flow of sap. The newer blue tubes have solved this problem.

In the immediate area surrounding the sugar shack, 250 pails are up. Over the course of the next four weeks an additional 50 pails will be added by the visiting Upper Grand District School Board’s grade one classes. The collection of sap by means of drilling holes and inserting spiles is a traditional method for collecting sap.

The Island Lake sugar bush is used primarily by the Upper Grand District School Board for their grade one maple syrup program. The Credit Valley Conservation Area uses the same learning/interpretive stations for their Maple Syrup Festival.

In my next blog I will feature the five day Maple Syrup festival which is one of Orangeville’s popular spring events.