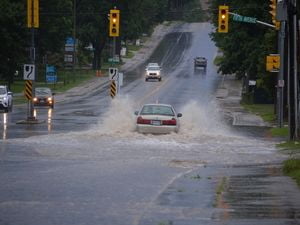 Last fall the talk at the local cafes was all about the drought of 2016. I took over 200 photos of Island Lake to document the extremely low water levels. How the narrative has drastically changed from the fall to the spring. Friday morning the chatter was all about flooded basements, overflowing streams and rivers, parking lots that were totally submerged, closed streets and to the extreme two individuals canoeing on Town Line in front of Burnside’s.

My pictures for this week’s blog include photos of the Middle Credit Creek which is located south of Hansen Boulevard, water flowing over Amelia Street North, the parking lot at Staples and the Nottawasaga River. I personally had to clean up a small section of the Middle Credit of debris that had been left behind once the water levels started to recede. There was lots of evidence of bank erosion which clearly illustrated the force of the moving water which was roaring early Friday morning.

Surrounding communities such as Grand Valley reported flooding and road closures. Trying to avoid county roads there were closed due to surface water made travel rather interesting. Heavy rain, thunder and lightning continued on Sunday which played havoc on outdoor events such as the inaugural Mac and Cheese Festival held at the Agricultural Centre.

I’m hoping for clear skies for July 1st for the sake of all the individuals who put so much effort, planning and preparation into Canada 150 celebrations that will be taking place throughout Dufferin County.