On The Move with Wayne White – Week #7 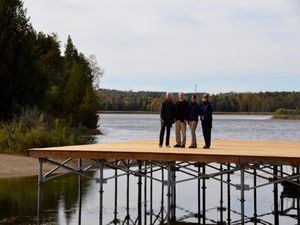 What is it? This is a question I have often been asked by trail users when they have spotted the outdoor stage that is under construction at the original designated swimming site at Island Lake Conservation Area. Thanks to Bill Lidster this week’s blog will shed some light on the concept to reality of the “outdoor stage/amphitheatre”.

Initially, Theatre Orangeville approached the Credit Valley Conservation Area at a Management Meeting with the concept of a floating stage in 2012. According to Bill Lidster, Manager of Conservation Parks, the proposed location was reviewed by the CVC and was deemed suitable. After considerable research it was determined that a floating stage was not feasible due to fluctuating water levels and other key considerations. The idea of an on-the-water stage would create a very unique visitor experience and draw a new user type to the park. The research conducted by Theatre Orangeville concluded that there was no other venue in proximity to ILCA that could compete.

Bill Lidster stated that the next step in the procedure to make the outdoor stage a reality was to form a committee of stakeholders. The committee was represented by a variety of disciplines which included an architect, Production Manager, Artistic Director and the General Manager from Theatre Orangeville, Town of Mono Parks and Recreation Director, the Rotary Club of Orangeville Highlands, CVC parks management and an adjacent land owner. Due to the Town of Mono’s noise bylaw and to confirm the business side of the proposed amphitheatre, the committee did a test concert to measure noise levels and see the potential for this type of venue.

The “test event” consisted of a variety of music genres and various sound locations were set up around the perimeter of the park to measure noise levels. The event was hosted by Orangeville Theatre’s, David Nairn, who introduced the many talented acts. I attended this event and it was indeed a very unique and special experience. The view from shore with the lake in the background as I was watching and listening to the performers it gave me chills. There were a number of curious onlookers who arrived at the beach area by canoe and kayak to take in the concert. The event started at dusk as darkness settled in, the atmosphere and experience was one that is unique to an outdoor venue.

Bill Lidster was very pleased to report that the event was successful and made a small profit thanks to the support of the local community, artists and volunteers who donated their time. The sound test concluded that noise levels were within guidelines and generally accepted by the surrounding communities.

The next step was the design of the stage which will include a canopy. Along with my photos Bill provided engineer drawings. The company which installed the ground screws for the two west link bridges also installed the supporting structure for the outdoor theatre. The CVC staff then followed up with the constructed the deck and bridge to the stage. According to Bill Lidster, the canopy design has been approved and the wheels are now in motion to have it added to the existing deck in the foreseeable future.

The development of the outdoor stage is due to the generous financial support from the Rotary Club of Orangeville Highlands and Orangeville Home Hardware. The CVC also received a Community Infrastructure Program grant for the stage.

The final phase will be the addition of armour stone seating which is shown in the concept drawing provided by Bill. The CVC has already received numerous inquiries regarding bookings for weddings so there is a growing excitement about this new and truly wonderful addition to the Island Lake Conservation Area.