Week #16 The World According To Wayne White 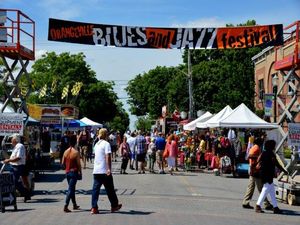 I always look forward to Orangeville’s annual Blues and Jazz Festival because of the great music, vintage cars, motorcycles and especially the freedom to be able to walk up and down Broadway and along Mill Street. In anticipation I carefully checked the weather network in hopes that Mother Nature would cooperate. For the most part she did which resulted in record number of people attending this years’ event.

On Friday night I had my good neighbor Mike Mullin drop me off at the east end of Broadway so that I could capture pictures of the amazing collection of vintage cars that were on display. After I jumped out of Mike’s pickup I ran up to my first vintage car, a bright red mustang which is one of my favorite cars. To my horror my camera battery was dead and my backup battery was being charged by my computer table at home. No pictures but I still got to view the many cars that I drooled over as a young impressionable teenager. There were several muscle cars on display including Mustangs, Camaros, Thunderbirds, and Corvettes. As I walk up Broadway all I could keep thinking was, I saw that car in American Graffiti!

On Saturday, Wanda and I along with her niece Teri and her husband Chris, walked along Broadway and Mill Street to take in the many bands. What I found interesting was the number of people who decided to walk on the congested sidewalks and not take advantage of the open streets. After purchasing many items at the Farmers’ Market we took time to relax on the patio at the Mill Creek Pub. While relaxing, enjoying one or possibly two cold drinks, we took in the sounds of live music playing at the Mill Creek Pub while hearing live bands from Soulyve and from various other locations on Mill Street. This rather unique experience is just one aspect of the Blues and Jazz Festival that makes is so special and why it is rated in the top 100 festivals in Ontario.

On Saturday night I worked in the Orangeville Lions food booth as the French fry guy. I really enjoyed people watching and those of us working the Saturday night shift all commented about the number of people we didn’t recognize which is evidence that the festival does attract a lot of out of town visitors. I did have the pleasure of meeting several former students, parents of former students and members of my Mono and Amaranth Public School girls’ volleyball team. We were so busy in the food booth that we ran out of hamburgers, several brands of pop, fried onions and gravy. What a great weekend for the Town of Orangeville.

Up next I will share my enjoyable experience at the annual Seniors’ Day at Island Lake Conservation Area and I hope to capture photos at the Compass Church run for food on Saturday, June 11.