Week #26 The World According To Wayne White 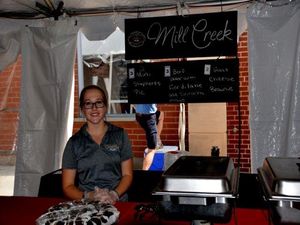 Mill Street was a beehive of activity on Saturday, August 20 with the annual Taste of Orangeville running from 11:00 am to 4:00 pm. When I arrived at 1:30 with my camera in hand the tent was full and line ups to the various sampling tables were long. The aroma alone was worth the walk to Mill Street.

The tent was spacious which allowed for easy maneuvering to view what the local chefs had to offer. Outside of the tent were extended patios with live music.

The local media were out in full force. I was greeted by Jim Waddington, Sandra Toth and Alex Heck. The greatest ambassador for Orangeville is Jim Waddington whose photos are posted on his Orangeville Now facebook page which I always enjoy viewing because his photos are so exceptional. Sandra had her tape recorder in hand gathering sound bites for myFM 101.5 and Alex was there taking photos for the Orangeville Banner.

Following the Taste of Orangeville was the outdoor large screen viewing of the Tragically Hip farewell concert which was held in Kingston. My good friend Lisa Hogben provided her take on the atmosphere on Mill Street:

Toddlers and teens, twenty somethings to seniors. We were all there. The electricity was palpable. When Gord would close his eyes, perhaps he was struggling or just taking in the moment, the Mill Street fervor would freeze, and tears would escape throughout the crowd, and when he would smile, the entire street would smile. Tonight we were one big family, and we shared the highs and we shared the lows. And then we left at the end, feeling like we were part of something big, that night in Orangeville.”

Up next is the RCMP Musical Ride which is being held this Friday at the Orangeville Agricultural Centre. I will be there cooking away in the Orangeville Lions Club food booth.