Week #37 The World According To Wayne White 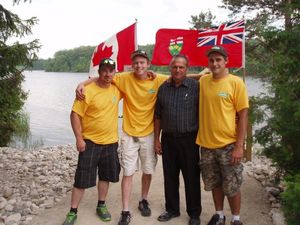 Bob was a board member of the Credit Valley Conservation Area in 1985 when he first recommended constructing a trail around Island Lake Conservation Area. Many board members questioned his plan since it required crossing the lake and he was told that it couldn’t be done. That was the wrong message to give Bob.

Bob was so determined to get the trail system built that he devoted a lot of his own time and energy planning and constructing the trail. He along with his brother-in-law Harvey Clark and FOIL members scrubbed the trails in preparation for the actual construction. Work parties were organized to cut and drill hemlock timbers that were used to construct cribs that formed Bob’s Bridges. Under Bob’s direction volunteers delivered materials to the islands for the east link and to the boardwalk which forms the west link.

Bob, with his vast connections through his business “Country Trades”, has been highly successful in getting corporate and private donations throughout all phases of the trail. Bob was responsible for suggesting that FOIL begin collecting scrap metal as a fundraiser. He announced at a recent CVC Board meeting that his scrap metal collection program has raised over $30 000.00. It was Bob’s suggestion that the CVC and FOIL host a bass tournament which has generated thousands of dollars for the CVC Foundation.

Bob’s vision of having a trail circumvent around Island Lake has become one of Orangeville’s and Town of Mono’s biggest tourist attraction with data supporting this statement. We all owe Bob Shirley a great deal of thanks for his perseverance and dedication toward the trail.