Week #39 The World According To Wayne White 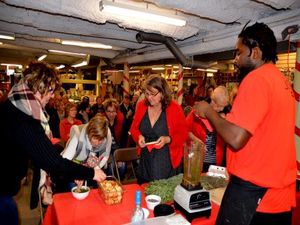 Philip was very entertaining with his warm personality and great sense of humour. He easily engaged the large crowd by sharing his knowledge of cooking with his emphasis on the importance of the use of herbs. It was difficult to fathom that this was Philip’s first speaking engagement. He was indeed nervous but he quickly became very relaxed and appeared to be really enjoying the task at hand.

Philip explained that herbs have been used for centuries and yet to this day are an important ingredient to many recipes. He did stress the importance of fresh herbs which is why he maintains a small garden at this local restaurant.

He was multi tasking by preparing his brown sage butter while at the same time explaining and demonstrating how to make pesto sauce using garlic, salt, pepper, chopped sage, chopped rosemary, fresh thyme and olive oil.

The best part of his demonstration was when he invited the audience to come forward to try his pesto sauce and brown sage butter on croutons that he had previously prepared. Words can’t possible describe how wonderful his butter and pesto tasted. I left the presentation craving for more which is indeed a complement to Chef Philip.

Dufferin Garden Centre in Orangeville, will be hosting other seasonal events. On November 19 starting at 1:00 pm they are offering a miniature fairy garden workshop. This is followed by a series of winter workshops where their staff teaches how to design stunning seasonal displays. They wrap up their festive season with a centerpiece workshop on December 3rd which starts at 11:00 am.